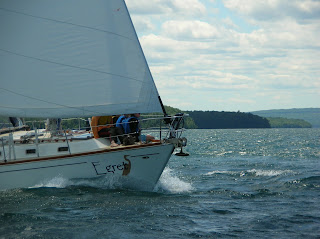 Our two overnight boats, Egret and Esprit, were upgraded last fall in their electrical systems with the goal of becoming less dependent on using the motor for recharging the batteries during a multiple day sailing trip. The project consisted of LED lighting changes for energy conservation--the anchor light was a big savings—and the addition of solar panels to keep the batteries topped off recharge a little. Our goal was to never have to plug in to shore power when we get home and to never have to run the engine during a trip for the sole purpose of charging the batteries. In the past, the engine needed to be run for about an hour per day while on a trip to keep the batteries charged to provide lighting, electronics and pressurized water for the sinks.


This summer, we sailed in and out of anchorages and even sailed in and out of some docks while out in the Apostle Islands on overnight trips. It never became necessary to use the engine to recharge the batteries. There are, of course, times to use the engine to propel the boat and for coming in and out of the harbor in Bayfield. The conservation measures and small solar panels worked together to cut down and nearly eliminate our need for charging. The lowest I saw the battery voltage was about 12.2 volts (about 2/3 discharged) and usually it was fully charged and barely moved down at all below 12.4 volts by morning. With any sunlight, the panels kept the voltage above 13 volts and fully recharged during the day. On one open water crossing on a sunny day, we were charging enough from just the solar panel to run all navigation electronics, radios and the auto-pilot!

This was a great project. At least half of the days are windy enough to not use the engine at all and in the past we would run it anyway, just to charge the batteries.

All in all it was a great success!
Posted by Dreamcatcher Sailing at 12:16 PM No comments: Links to this post