Teenagers at their best

Normally, sailors take down the sails and motor into a busy anchorage. With a dose of hollering and frustration, they drop the anchor, back the motor down to set it, and finally, shut off the noisy engine and settle in for the night. It is a bit like watching a couple back their motor home into a narrow spot at the campground. To improve their skills, the teenagers who sail on our group trips learn to do this all under sail, with grace and pride. This often draws applause from those who may be anchored already, and certainly admiration. 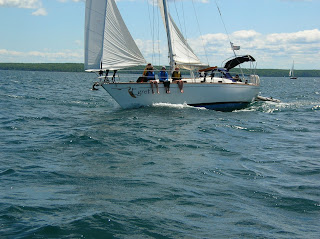 On our group overnights, each new group of six teenagers aboard get pretty good at running the boat after a couple days. A group from a couple years ago, I remember well. They arrived the first evening at the dock with very little skills but lots of enthusiasm. The next morning when we left Bayfield, they drilled and learned and practiced laughed and by the second day the girls were running the boat all by themselves. They had gone from knowing very little about sailing to mastering such advanced skills as anchoring under sail.

The wind was blowing hard the evening of Day 2 as we approached Raspberry, one of my favorite Apostle Islands. The waves were several feet high and we came tearing across them toward the point that protects the anchorage from the open Lake. Beyond the point, the water was flat glass calm and contained several other boats resting at anchor. As we came to find out, one of the boats was another group of teenagers--boys, with their captain, who had motored in and dropped anchor a little while before (picture the RV couple at the campground). They were jumping off the boat and swimming, trying to show off to each other and anyone else around, as teenagers do. We were aimed right for them as we roared past the the point and into the calm, crew ready to douse the sails and drop the anchor. Now, when someone is sailing in hard right at you, it appears like you might be rammed and sunk, but at just the right moment, the young lady at the helm turned hard to port spinning the boat into the wind. The others furled the jib (the main they had taken down a minute before) and we quickly came to a stop in the perfect resting place. The anchor was deployed. After practicing this manoever five times over the past two days, no one was even excited and they acted like they had done it all of their lives. The girls cleated off the anchor rode and returned to their discussion about Twilight, or whatever book they were reading. They paid no attention to the neighboring boat but there was a subtle pride when the boys applauded. "What's their problem?" Giggle.
Posted by Dreamcatcher Sailing at 8:45 AM